Clinical Study for Horses and Back on Track Products

School study on horses with back problems

At the Strömsholm Riding School, Sara Grundström and Stina Burström in 2004 undertook a blind study that was conducted on horses with back problems. The results of this study are most certainly applicable to humans as well, especially since horses are not prone to the psychological influences of humans.

The study was conducted over two consecutive three-weekly periods. Throughout the first three weeks, half of the horses wore only their normal blankets, whilst the other half wore the Back on Track back warmer as well. 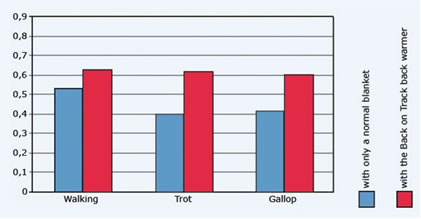 At the end of the first three-week period, both an independent veterinarian and a professional rider carried out an evaluation, neither whom were privy to the knowledge of which horses used the back warmers.

The Back on Track back warmers were then transferred from the one group of horses to the other for the duration of another three-week period. At the end of that term, all horses were assessed again under identical circumstances to the earlier evaluation. After correlating all information, the indications were that eight out of ten horses improved their gait at the trot, and seven out of ten at the gallop. Despite the trial involving only ten horses, it reached a significant statistical result.

Scores from the evaluation (y-axis) of the backs movement during walking, trot and gallop, done by the veterinarian. 0 indicates a pathological back movement and 1, 0 a first-rate movement of the back. All 10 horses are included in each bar.

LEGS: Significant results can be seen in just 3 days.

Day 0, patient demonstrates circulatory disruption and nerve changes on the front left distal limb as indicated by the cooler areas in blue.

After 3 days of wearing a Back on Track standing wrap, the patient showed equalization of the distal front limbs. This symmetry remained stable following 14 days of continuous wear.

Clinical Study for People on Back on Track Products

“We have shown that heat will result in alterations in the body, which will diminish pain and chronic inflammation”, says Thomas Lundeberg, associate professor in physiology at the Karolinska hospital (ref; The Swedish journal Health “Hälsa” nr 9, 2000). A doctor interested in this subject is Dr Rose-Marie Brinkeborn, who has conducted a clinical study on the efficacy of Back on Track braces together with colleagues and physiotherapists.

The study included 120 patients who had experienced pain caused by either arthritis of the knee or tennis elbow for a period of at least 3 months. The subjects were randomly separated into two equal sized groups, and their levels of pain were immediately evaluated on a scale ranging from little pain to considerable pain. One group of patients were required to use the braces for a three week period, then stop using them and revert to their own previous methods of pain management for the next three weeks. Simultaneously, the other half of the patients, who had been instructed to rely on their normal methods of pain management for the first three week period, were now instructed to use the braces for the ensuing three weeks.

The overall results of the study are not yet finalized, but it has been established already that more than half of them had less pain when they were using the braces. Those with tennis elbow often went back to normal, and some of the patients with knee arthritis, who had been living with pain for a long time and were booked for prosthesis surgery, felt so relieved from pain that they could exercise again, and chose to postpone their surgery!

In the daily paper Svenska Dagbladet (January 25th, 2003), Dr Xyao Huishen who worked at the rehabilitation medical clinic at Karolinska hospital expressed: “These braces have no adverse effects if the right size is used”. In a later paper, Massage and Bodycare 1/2004, Dr. Huishen, after gathering additional knowledge of the products, states: “In principle, besides drugs, there is nothing else that offers such reproducible results on patients who have inflammation generated pain.”

An example of how the study subjects evaluated pain on a scale (visual analogue scale). Movement capability was also evaluated in a different diagram. “So far there is no subject who has not had some kind of improvement with these ceramic braces”, says Dr Brinkeborn to the journal Allas early on in the study.

Scientific Articles of Far-Infrared Therapy – Back on Track

Back on Track are a company that produce a range of therapeutic products for horses, humans and dogs that work through the utilisation of properties of ceramic particles and infrared radiation. This study was conducted on 44 randomly selected horses, and sought to investigate the changes in locomotion resulting from the use of “Back on Track” therapeutic rugs. Locomotion was measured in three ways; fore limb stride length (FLSL), hind limb stride length (HLSL) and hind limb protraction (HLP). During the experimental periods there were highly significant improvements (P<0.001) in all three measurements, while there were no significant improvements in any of the three measurements during the control periods, although there were deteriations. The results of this experiment not only provide evidence of the efficacy of the “Back on Track” therapeutic rugs, but also lend support to the wellbeing and performance enhancing effects of infrared radiation.